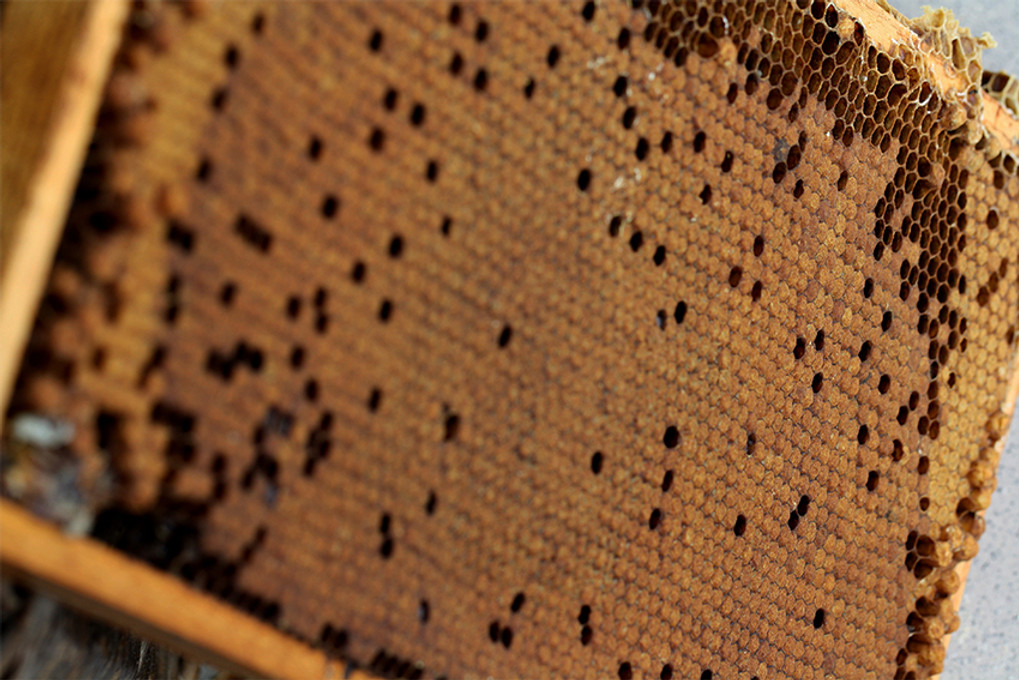 There is a lot of misinformation, misunderstandings, and outright lies, circulating in the New Zealand beekeeping fraternity about the very excellent varroa control product, Apistan. I plan to set that right. I’ll do that by paraphrasing a letter I wrote to a good beekeeping friend (his name is changed so as not to embarrass him) who carried these false impressions for a number of years. I hope in the end, if you have never used Apistan because of the lies told, and poor science done in NZ, you might reconsider using this most excellent varroa killer.

Back when I first took over Ceracell, I was surprised when you told me that you wouldn’t use Apistan because it had much more active ingredient in the strip than was needed. I decided to find out the truth. And low-and-behold you were right! It boggled the mind that this was so. However, I read the large manual prepared by the manufacturer who explained their research and development process. In order to have a strip that delivered a consistent lethal dose of the active ingredient to the mites over an 8 week period, they had to do something different than just cover a plastic strip with the chemical (which is what most other strips are). In technical terms, they invented a strip that delivered the chemical using “zero level kinetics”. Most other strips use first level kinetics. 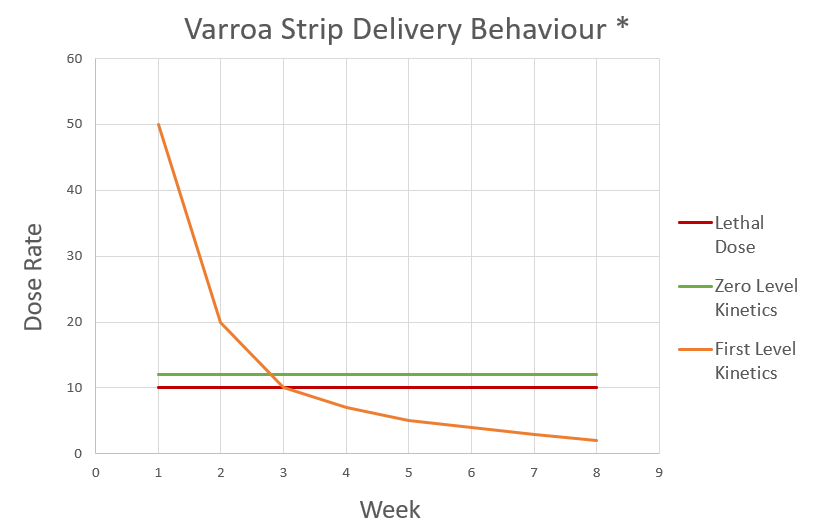 *A simple representation, the numbers are used to generate comparative lines

To achieve zero level kinetics, that is, to get that straight line just above the lethal dose, they created a strip called a “polymer matrix” that holds the active ingredient in little cells. It is sort of like a sponge full of water. Each cell contains just the right dose to kill a mite. When a bee bumps into the strip one dose from an outside cell is delivered to the bee. The polymer matrix actually holds the active ingredient really tightly so in order to refill that now empty cell on the outside of the strip, they needed a very large amount of the active ingredient in the inner parts of the matrix so it would move out. They called it a chemical pump. These physical and chemical properties are critical to ensure a consistent lethal dose is delivered for the whole 8 week period. When the 8 weeks are up, and the strip is removed, 99% of the chemical comes out too. It is locked in the polymer matrix!

You should notice that Apistan does not evaporate when the packet is opened (the polymer matrix holds the chemical tightly), and the unused strips last perfectly well in the opened packet just clipped shut until they are put in the hive and bees start bumping into them. Other strips must be used once the packet is opened otherwise the chemical will evaporate and the strips become useless.

With the other strips using first level kinetics, they deliver a huge dose of chemical the first couple of weeks as the chemical is rubbed off. But as the chemical disappears the dose can become sub-lethal which is the exact conditions to cause mite resistance.

In regards to the very high levels of active ingredient in the Apistan strip being held as a negative, I must say I hold a highly regarded NZ scientist as the source of this false belief. In my deep investigation of the situation, I read the research that he did on Apistan. He found that cutting the strips in half, and using them they were just as effective as whole strips (we strongly recommend you NOT do this in practice). In fact he found that it wasn’t until he had the strips down to a twelfth of their size that their effectiveness diminished. And he ascribed this to the fact that there was a huge amount of unnecessary active ingredient in the strip. He failed the beekeeping fraternity miserably with this conclusion!By not understanding the design and behaviour of the polymer matrix zero kinetics delivery, he assumed that the amount of active ingredient was a bad thing. In fact it is a good thing, being necessary for the strip to perform as designed. If it was a strip like most other strips where the chemical was just on the surface, his conclusions would be correct. But they are not. This conclusion has failed the beekeeping community of New Zealand, and caused some beekeepers to mistrust a product that has served beekeepers world-wide faithfully and effectively for decades.

The idea that Apistan leaves residues in honey, I believe came from a test very early on when varroa first invaded New Zealand. There was a study where 10 beekeepers supplied honey samples for testing for Apistan residues. One of the 10 came back positive. There was a trace amount of active ingredient at just the detectable level. I had a good talk with Trevor, the former owner of Ceracell, about it, and he laughed scornfully. Trevor knew the beekeeper who supplied the one positive sample and he was such a shoddy operator, Trevor said, he probably left the strips in during the honey flow and wouldn’t have properly filtered his honey. The honey was probably full of wax particles. The residues were undoubtedly in the wax, not in the honey. So, in all likelihood, the beekeeper didn’t follow the directions for the use of Apistan, that is, not to have it in the hive during a honey flow, and he failed to properly filter his honey.Undoubtedly had he done so, there would have been no detectible levels of Apistan in the honey. To use this one event to suggest that Apistan will leave residues in honey, and that Bayvarol will not, is ludicrous.

This is a pared down discussion of how Apistan works. You can be assured, that Apistan is a technologically superior product, which has been used worldwide for many decades with great success.In fact other products are often compared to Apistan to evaluate their effectiveness.

Keep up with the buzz